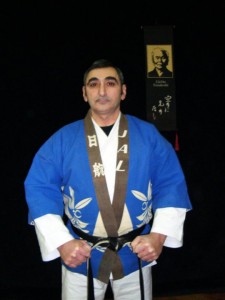 The great master of oriental martial arts, the trainer, the teacher who has devoted to art of ancient fight and studying of ancient the technician of the East of 40 years of the life. The Armenian, now together with a family from 1987th year lives in Hungary.

The owner of a black belt and the 4th international it is given on Karate, karate-Do Shotokan skillfully owns, conceal – dogs, aikido, the kendo, тамишивари and other types of single combats.

Founder and founder of two schools and two directions:

1. school of 6 types of fighting arts – karate club “the Iron Fist” – the champion of Hungary of 1996, the owner of the main prize of the competitions “All-Hungarian Main Cup of the Master”.

2. school of medical and improving art “Body and spirit revival”. In a basis: own medical and improving technique developed by Yury Levonovich which is based on a fundamental basis of most ancient of east the technician of India, China, Japan, the main which classical direction is achievement of revival of a body and internal harmony.

In youth — a rank of the candidate for the master of sports on free-style wrestling. Occupations by a bar, swimming, oriental martial arts. I was the pilot of DOSAF.

1979 — at the All-Union Moscow Seminar of trainers Yury Levonovich participates in structure of judges on karate, and receives the certificate of the trainer No. 0021, and also the right to refereeing at all large competitions of the Soviet Union. I was a part of 18 strongest judges of the USSR on martial arts.

1979 December — opened the first karate USSR championship in Tallinn, also – in Moscow. Further it was invited to all large allied competitions. I was entitled the judge of Republican category. I began the activity with such colleagues, as Yury Orlov, Todeush Kasyan, state. Karate coach Eric Agayev and other outstanding persons.

1990 — Yury Levonovich by the invitation with a family moves to the Hungarian Republic.

1994 — Yury Levonovich creates on the basis of the Russian school at R.F embassy. in Hungary the Russian of karate club who in 1996 became the champion of Hungary.

1998 — a repeated triumphal victory of club in the championship of Hungary.

1999 — the club takes an honourable 4th place on karate in the Junior World Cup.

2000 — after receiving the third international it is given Yury Levonovich include in structure of the Hungarian delegation for participation on “The world Congress on martial arts” in Holland.

2003 — Karate club “the Iron Fist” was brought in the encyclopedia “The Russian World in Budapest”” by the author of the book Aristov Vadim.

2009 — Release of the video disk of the 1st part of video release of improving gymnastics “For the sake of youth and longevity”, presented to already many people disposal of chronic illnesses and organism rejuvenation as a whole.

2005 — The book under the name “Return to Itself” about Yury Levonovich and about the system developed by it (authors was written: Katalin Veres, Alexander Pavlenko).

2010 — Was are removed the documentary movie interview in a framework телеперадчи “Why Hungary? ” Hungarian televizionnymkanaly “Donne” about Yury Levonovich and his school, DVD release and participation in TV-discussion.